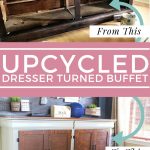 A beautiful transformation of an old mahogany dresser into a modern buffet for the dining room. 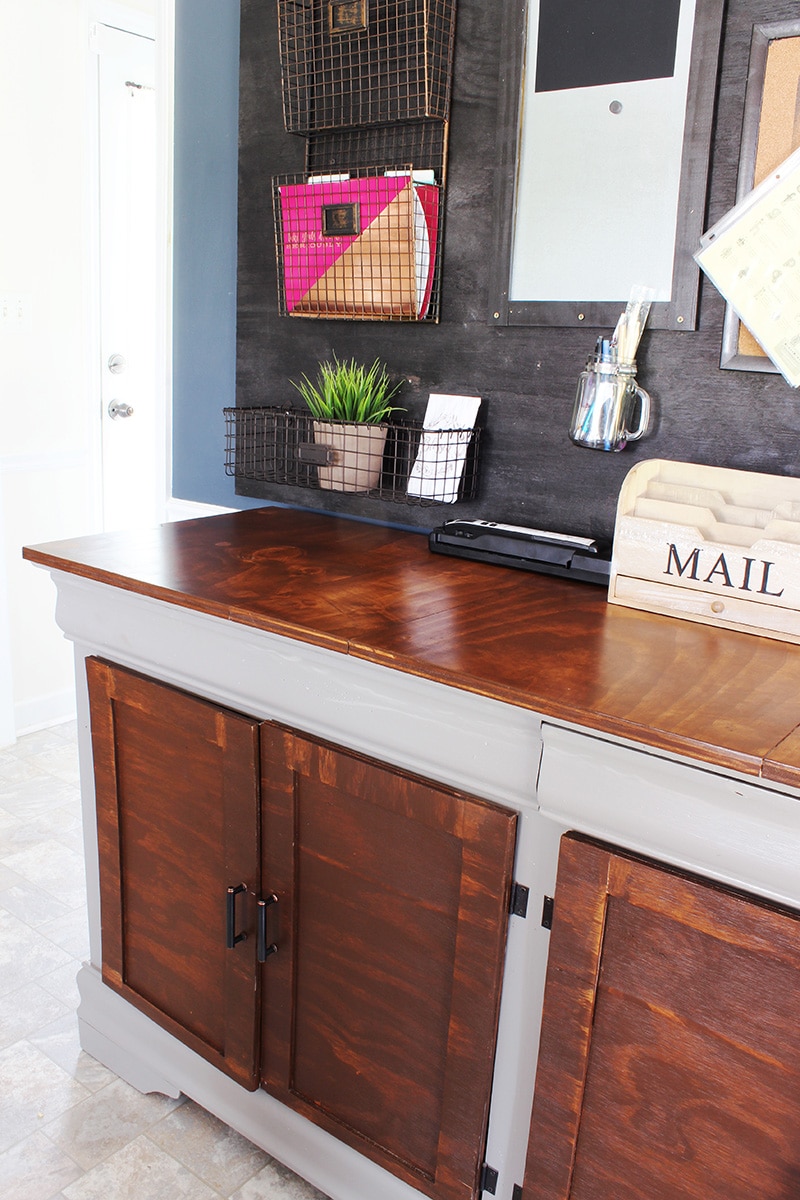 I am tying up loose projects ends with this one. I finished this dresser-to-buffet transformation last August after coming home from Haven conference super inspired to DIY all of the things.

Coincidentally, I just bought my ticket for this year's conference and to say I am excited is an understatement.  Haven, was hands down one of the best blogging conferences I have been in attendance for.

Every month this year myself and 37 other DIYer’s like myself have teamed up to bring you some awesome DIY inspiration.  This months theme is Home Organization.  We are challenging ourselves to create useful projects that aid in organizing, repurposing and overall beautifying your home.  For a full list of the participants and see all the projects created throughout this challenge head over to the At Home DIY Challenge page.

In June 2017, when we first moved to our home, one of my Facebook friends randomly got in my inbox and told me she had some things in storage that I could have if I wanted it.

Among those things, she had this dresser that I thought I could convert into a buffet for my dining room. I knew I would need some extra storage and since this came to me at $FREE.99 I was gonna make it work.

Guys! This may have taken me a year plus to complete, but boy has it been worth it. It came out so perfectly.

The vision changed a couple of times over the course of the year. And I literally just kept tinkering along on it.

I removed the drawers and painted it almost immediately because I used the leftover paint from when we painted the cabinets last July. 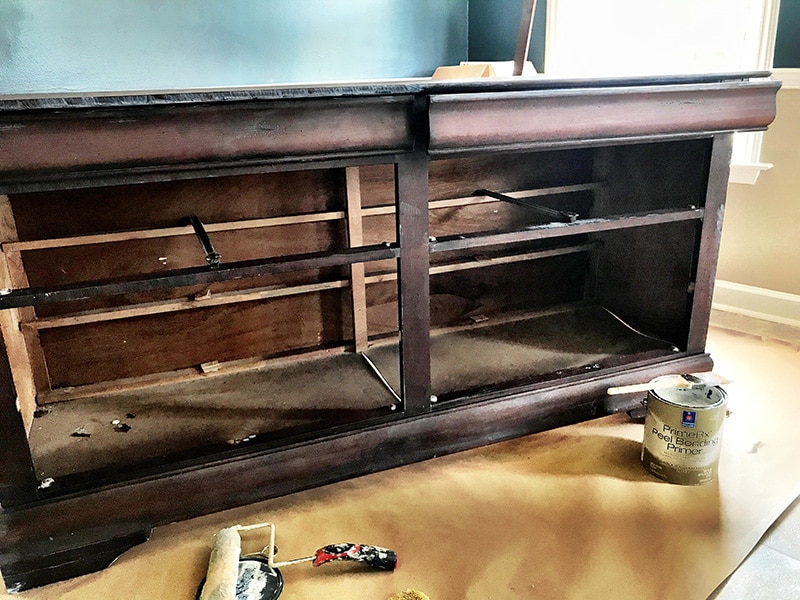 because I suck at taking before pictures this is the best I have. This was after I removed the drawers and applied a coat of primer.

But then it just sat.  For months…

I noticed that I had begun letting stuff pile up on it and I was like “enough”!

And that sparked me to create the wood top.

I did that using some wood pieces I grabbed from Home Depot.

Once that was completed, I swooned over that and then started pushing my hubby to get the shelves in it for me.

Like the awesome husband that he is, he got it done.  Then I lined them with shelf paper thinking that was easier than anything else, and no one would see the shelves really anyway.

But the shelf paper was not the adhesive type and so it became a headache moving around and whatnot when I would take out and put dishes away. And while no one except me would really see it, I still wanted it to be nice.

So I pulled everything out and stained those beautiful shelves and protected them with a coat of poly.

Then I messed around and had a whole week to myself.  A WHOLE FRIGGIN WEEK! All alone!

I had bought the wood for the doors months ago and it was just in the garage.

While at Haven I won a Dremel Saw Max which was perfect for this project.  It allowed me to be able to make my own cuts for the doors without having to wait on or bother the old man.

I spent a good part of that week alone in the garage putting those doors together for the finishing touch. 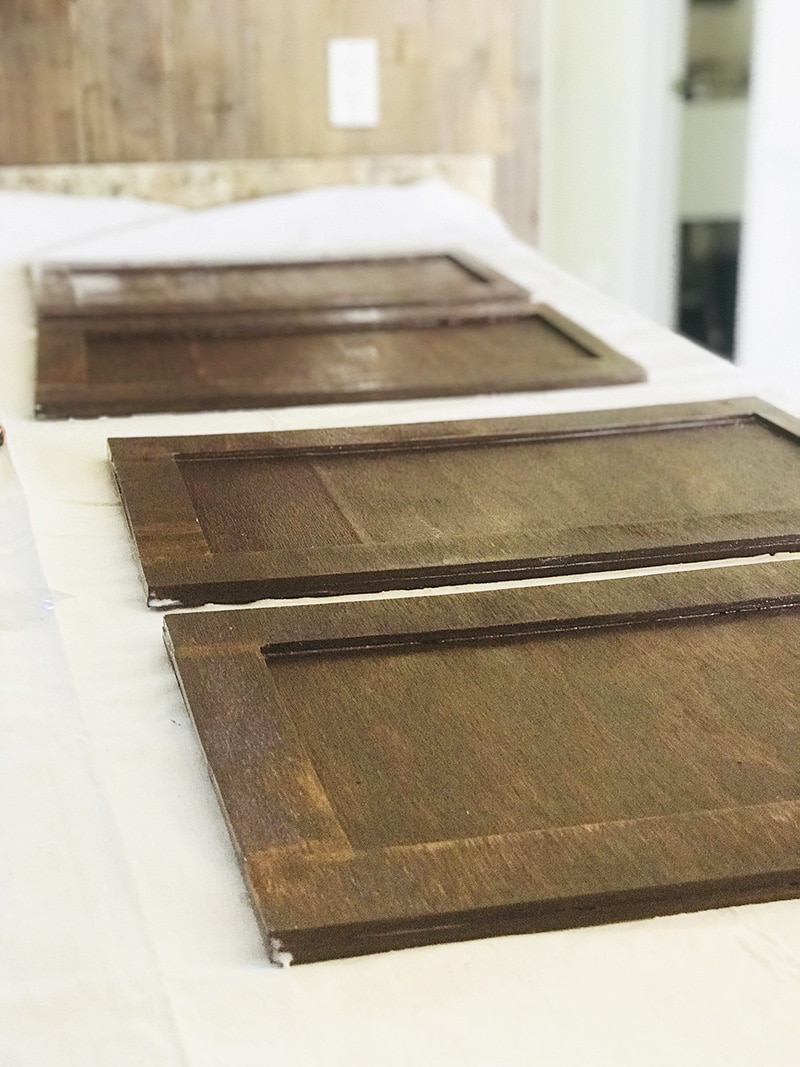 When my family came home they were so shocked at the finished project. It felt sooo good!

This is the final outcome. And it is the perfect addition to the kitchen/dining space. 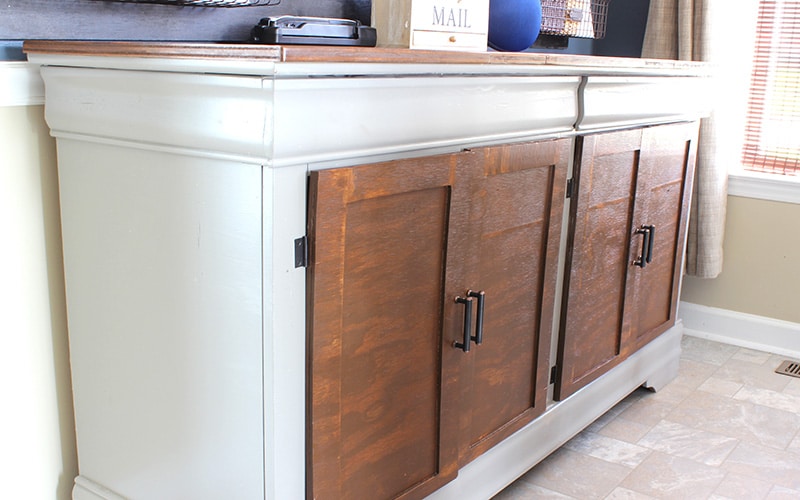 I used some old organizers I had to organize the pans and things in there and BOOM! 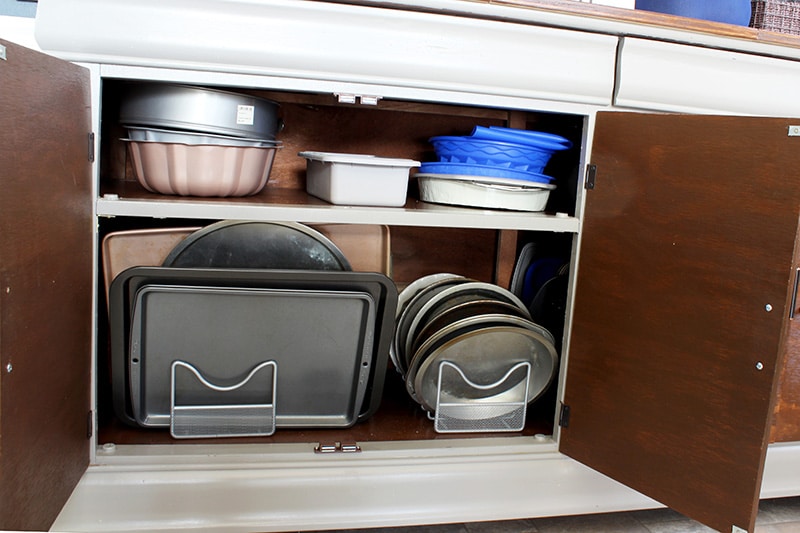 What ya think?  Worth the year it took?

Steps I Took To Turn This Dresser Into A Dining Buffet

Breaking down the dresser

Refinishing the outside of the dresser

Then I painted the outside and protected it using polyurethane.  I just followed suit with this after we finished the kitchen cabinets since I was already in a rhythm.

Creating the wood top for the buffet

I knew I wanted it to have a wood top so that it was more sturdy than just a regular dresser top.  Plus it looks good with the other wood accents in the dining area.

From there, I measured and installed the wood on top of dresser using wood screws. And filled the holes with wood filler.  I taped and covered the painted part and then stained and topped it with a protective coat of poly.

Converting the drawers to shelves

Then we added brackets to support the new wood shelves.  And measured for the opening and cut the wood to size. Using a total of four pieces to make two shelves. 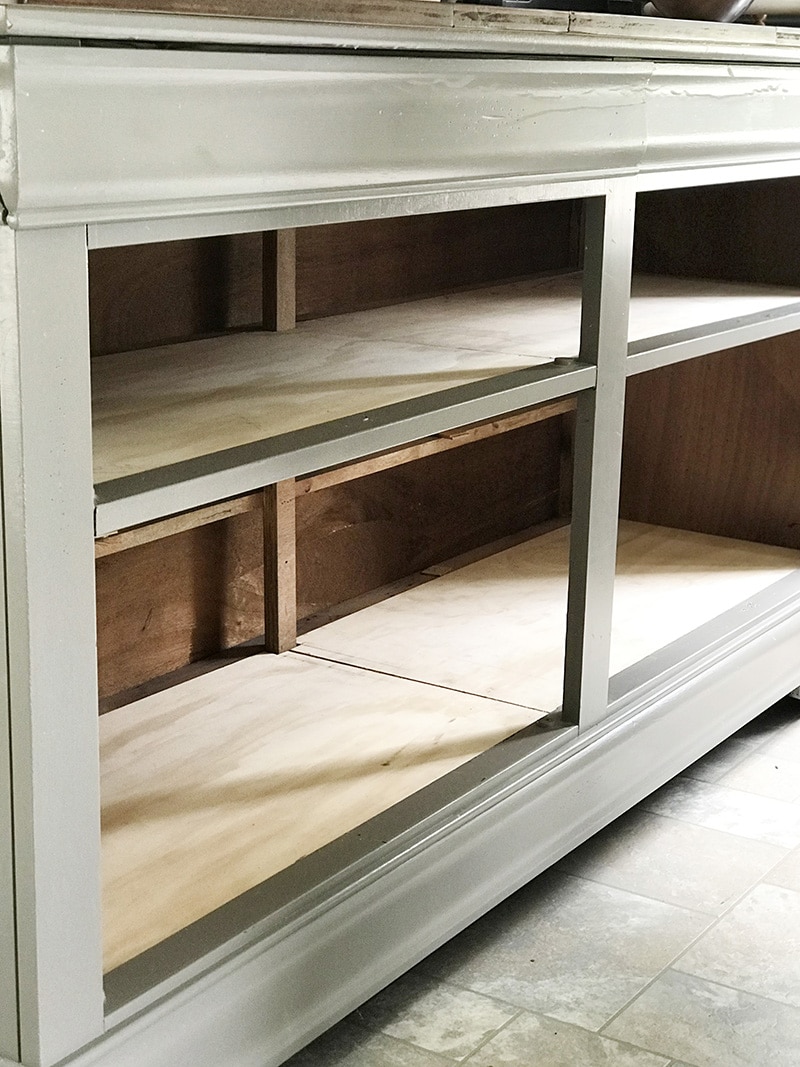 After we installed the wood shelves, we reinforced them by screwing them into the brackets for stability and then stained the wood. 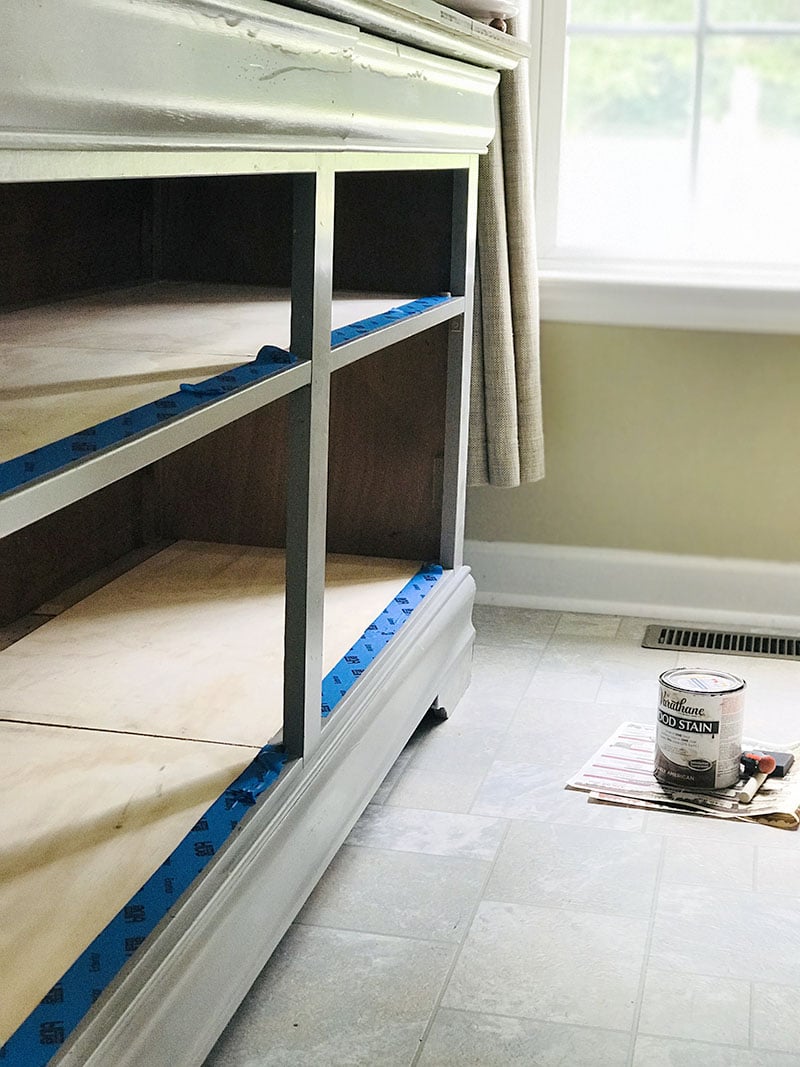 Building and installing the doors

The final step was measuring and creating the main part of the doors.

I created the trim for the doors from extra pieces I had and attached them using gorilla glue. Then I filled the seams with wood filler and stained the doors too. 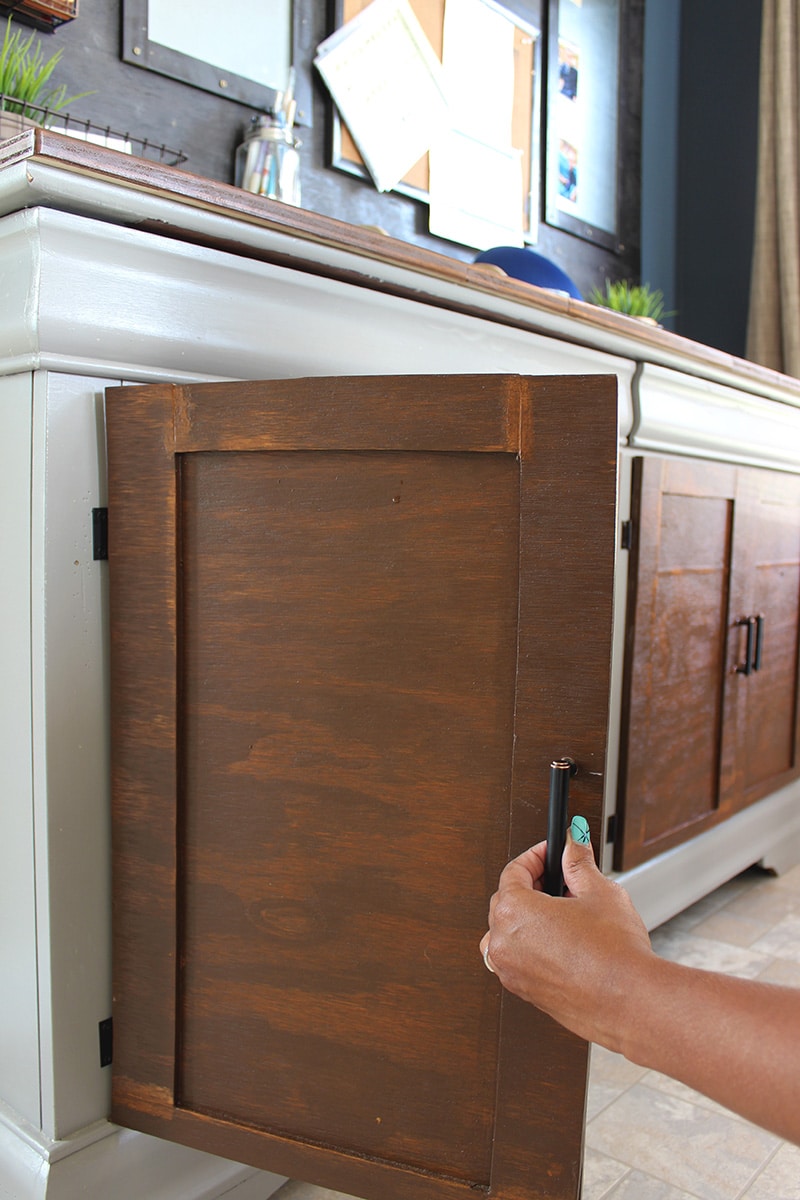 I installed the doors and added hardware and door magnets to help them stay closed. 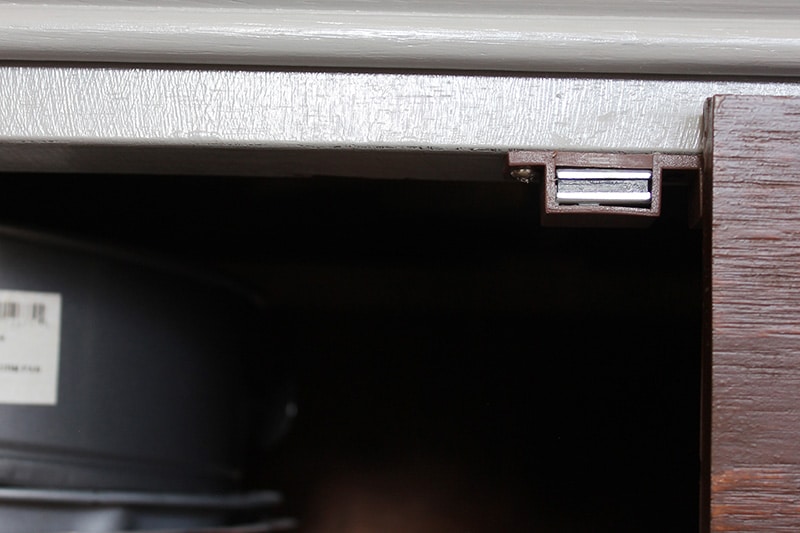 I truly think this has been one of my most rewarding projects to date. Which I probably say after every project cause they all are so special to me.  But this one really is, because I was able to do a great deal of it myself.  Even if it took me a whole year to get it done.

A hand-me-down mahogany dresser converted into a beautiful dining room buffet that ads charm and farmhouse vibes to the dining room.

Remember last month I told you about the team of ladies bringing you all the project inspo? Check out all the upcycled creativity below.

Other Projects You May Love:

At Home DIY Challenge 2019furniture makeoverupcycled furniture
Questions, Comments or Just Want to Say Hey ????????, Drop Me a Line in the Comments.
FacebookTwitterPinterestEmail

How to Set up a Home Family Command Center + Inspiration

It looks wonderful! What a labor of love. Pinned

Thank you so much! I appreciate that. 💕

I just visiting your blog and seeing what you’ve been up to. Your dresser makeover is amazing! I love your attention to detail.

Thank you so much Meegan! I appreciate you stopping by.

WOW!! Your hard work paid off!! The buffet looks awesome!! I want it!

Thank you. I am in love with it. It is truly a staple in the dining room.