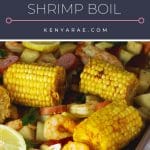 Simple. Quick. Delicious. Made in the oven, it is the best darn old bay shrimp boil packet you will ever make or eat!

This is one of those recipes that is inspired by a plate that I had while dining out.

It wasn't long before I was set to move from Cleveland.  Two of my close girlfriends and I went to this restaurant that one of them insisted we had to try.

It depends on whether you call eating with your fingers in toddler fashion but with gloved hands, fun.

As always, I had a good time with my friends, but I was not happy about how we went about dinner.

But one thing she was totally right about, It was tasty.  It was really good!

I left there thinking, there has to be a better way to get that taste, without all the mess.

So I got in the kitchen and made it happen!

While the one that we had out, included crayfish, this one that I am sharing with you today, does not.

I didn't not like the crayfish, they are not something that I have to have.

For this shrimp boil, the Old Bay seasoning along with the other spices gives a mild kick of spicy flavor. The Old bay in this shrimp boil recipe is really the star of the show!

Not inclusive of seasonings, all you need is a good 4 main ingredients to arrive at all of this yum!

Red skin potatoes, being my favorite kind of potatoes, is what I use.  You could probably use regular russet potatoes if you wanted, but I say go red!

The finished recipe is every bit worth the minimal time spent.

Did I mention this could be made right around thirty minutes??

Start out by heating up the oven to 400 degrees so that it can warm up while you are prepping everything else.

Cut up the potatoes into small to medium-sized squares and set them aside.

Then you also want to cut up the turkey sausage into pieces and set that aside as well.

Put on a large pot to boil. One that is large enough to accommodate the potatoes and the corn. Bring the water to a boil.

Once the water is boiling, add in the potatoes and boil them actively for 10-12 minutes, until the softer but firm.

Add the corn in the same pot for 5-7 minutes, and then remove from the heat and drain the potatoes and corn.

In a large bowl, combine all ingredients and seasoning, and mix well.

I like to put a lid on the bowl and shake it up. But you can easily just toss it with a spoon to make sure everything is well coated.

Spread out over a baking pan, or two if needed, and bake for 25 minutes or until shrimp is fully cooked and potatoes are tender.

You will know the shrimp are done because they will have a tighter curl to them.

Remove pan from the oven.

Sprinkle with some lemon juice if you desire, or just serve and enjoy!

WANT TO SAVE THIS SHEET PAN SHRIMP BOIL TO MAKE FOR LATER?  PIN IT TO YOUR FAVORITE BOARD FOR LATER!

Simple. Quick. Delicious. The best darn shrimp boil you will ever make or eat!

There is a slight spice to this because of the Old Bay Seasoning. If you want to decrease it, decrease the amount of Old Bay used.If using smaller sized potatoes you may need to add more.

Other Recipes You May Love:

30 minute meals
Questions, Comments or Just Want to Say Hey ????????, Drop Me a Line in the Comments.
FacebookTwitterPinterestEmail

Red potatoes are my favorite as well! Definitely going to try this.

There’s nothing like a great Shrimp Boil recipe! This looks great and packed with so much flavor!

I’m definitely pinning this! I love a good low country boil and this looks like a great version.

I am all for sheet pan recipes, especially when it comes to seafood. This is perfect, I’m definitely going to be trying it soon!