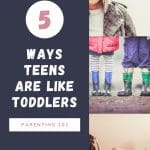 In parenting, after the sleep deprived newborn years, you look forward to the toddler years where there is increased independence, seemingly better communication, and possibly more sleep.

Then you enter the toddler years and you long for better days.  Only to realize that they aren't coming.  Teens and toddlers are almost one in the same and you have to be strapped in and ready for the long haul.

The lovely teenage years… if you have a child with any age ending in teen, you most likely know what I'm talking about.

And you also understand that it is said most sarcastically.

Your teen child, the one that was so sweet and agreeable has now turned into an oversized toddler.

They question everything that you know to be fact, and they tend to think the world revolves around them.

All regular occurrences in the world of raising teenagers.

They are a whole new breed of child, seriously!

If you're struggling with the teen years and want a little humor for the day, or perhaps something you can relate to, then continue reading for a fun, slightly therapeutic post for me, that's all about raising humans that look like adults and act like children – teenagers.

Don't believe me? Here are five of the many ways…

They Grow as Fast as Toddlers

That moment when you realized your middle schooler is sneaking up on your height?

Yeah, that happens during the teen years, if not before.  My daughter who is now in excess of six feet, met my height around the age of 11.

It's said that the growth spurt teenager's experience is comparable to the toddler years growth spurt. This growth spurt can make your teenager just as cranky as they were when they were a toddler. The reason is that they get overly hungry and don't sleep nearly enough.

At least toddlers have a nap time.

With an influx in hormones, lack of sleep, and that hunger from growth spurts, your teenager is fully capable of throwing toddler style tantrums.

Your teenager will throw a toddler style tantrum in a king size way. Leaving you wondering how the heck to handle this moment.

I'll share a trick with you, get them something to eat.

Ever seen one of the snickers commercials where hunger sets in and a snickers solves the problem?  I bet whoever had the idea, lived with a teenager…

Cause they are not themselves, when they are hungry.

But I will say, that neither am I…

Food will typically help calm their tantrum down somewhat quickly tho.

They Grunt and Whine a Lot

Teenagers seem to revert back to the toddler speaking years with their grunts and short word sentences.

Have you ever noticed how short your teenager is with you when you ask how their day was?

Perhaps you've tried having a detailed conversation with your teen about their day.

Either way, I'm sure you're quite familiar with these grunts and short answers in reply to your questions.

But then there is the whining and singing of words when they want their way.  Instead of Mom, they say moooooooom.  Which tells you just what you are dealing with.

While I will say teens can have some of the most fabulous wardrobes, some seem to have gone backward.

They want to dress themselves, much like the toddler years but have forgotten every fashion sense you've taught them through the years.

And it seems that if it is a style you even act like you like, they are not interested and will most likely rock the exact opposite fashion.

Even basic color matching has escaped the brain of the average teenager, much like a toddler.

Unlike a toddler, girls get to the point where they want to test the risque waters of fashion. And then trying to reason with them is nearly impossible. Which leads me to my fifth point.

Ever tried to reason with a toddler?

Particularly one that knows everything?

Teens are no different. After they enter the teens, not only do they know everything and you know nothing. They are surround by the smartest most well knowing people that have experienced absolutely nothing, none as their peers.

They are all-knowing. Leaving us to only be needed for our bank cards and transportation until they get licensed aged and “think” they are independent…

Until they need gas money.

These are just some of the ways teenagers are like king size toddlers.

I'm sure you can add more to my list because every teenager is different, but they all act like king size toddlers occasionally.

Because I was adventurous enough to have my children ten years apart, I got to experience the toddler and teen years combined.

Each stage has its joys in parenting, but boy do those teens keep you on your toes.  They both will have you wanting to subscribe to wine to survive.

Stay up my friends. Stay up….

parentingteenagerstoddlers
Questions, Comments or Just Want to Say Hey ????????, Drop Me a Line in the Comments.
FacebookTwitterPinterestEmail

Oh man – you’ve put the whole situation into perspective for me. I just really miss when they liked me. Now I’m so STOOPID and my daughter constant reminds me what a terrible parent I am Especially to her older brother. They’re 15 and 19. Awful.