The Amazing Thing That Happens When You Pair 2 Unlikely Things

This is a sponsored post on behalf of The Cowfish Sushi and Burger Bar. To learn more about what that means click here.

It use to be that when you combined a cow and a fish, you got surf and turf. You know a fat juicy steak and a lobster tail or some shrimp.   But The Cowfish Sushi and Burger Bar has given us a new spin, and if you didn’t know, I’m about to learn you something today! 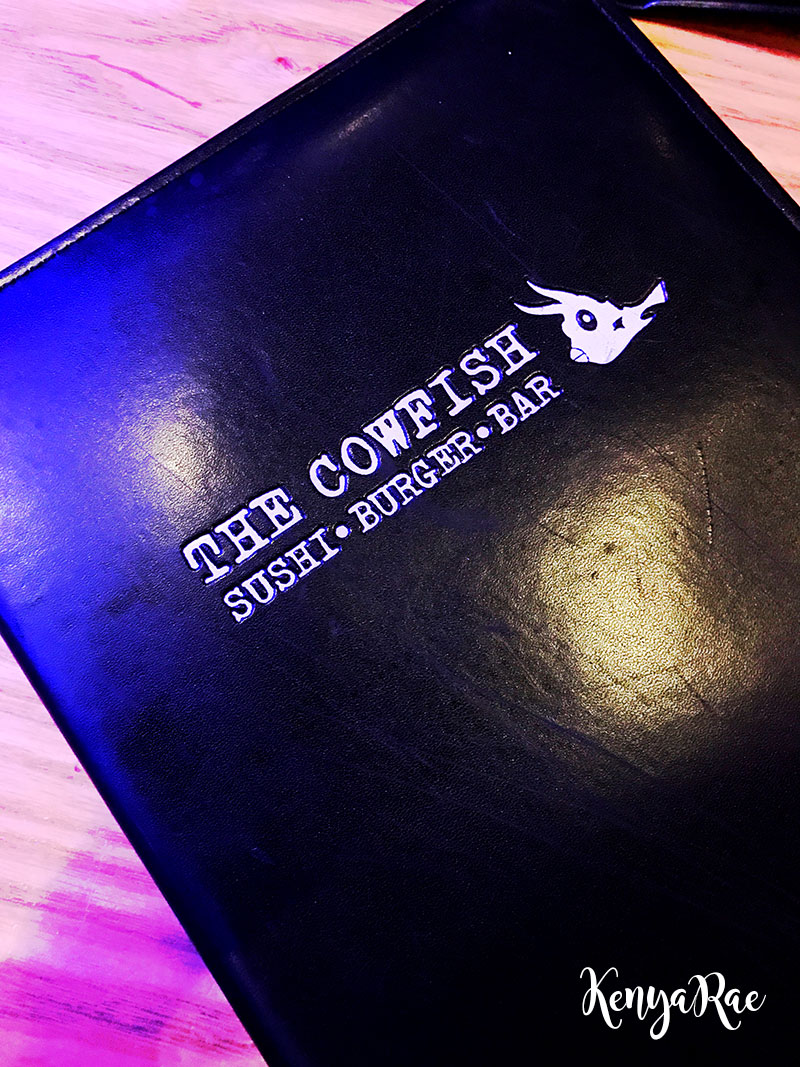 Sometimes things that we think don’t go together actually come together into a perfect fit.

I can relate to this in my life, and it may be the very reason it took my hubby and I to realize that we were made for each other.

Meeting when we were 13, and not actually beginning to date until we were in our mid-twenties. 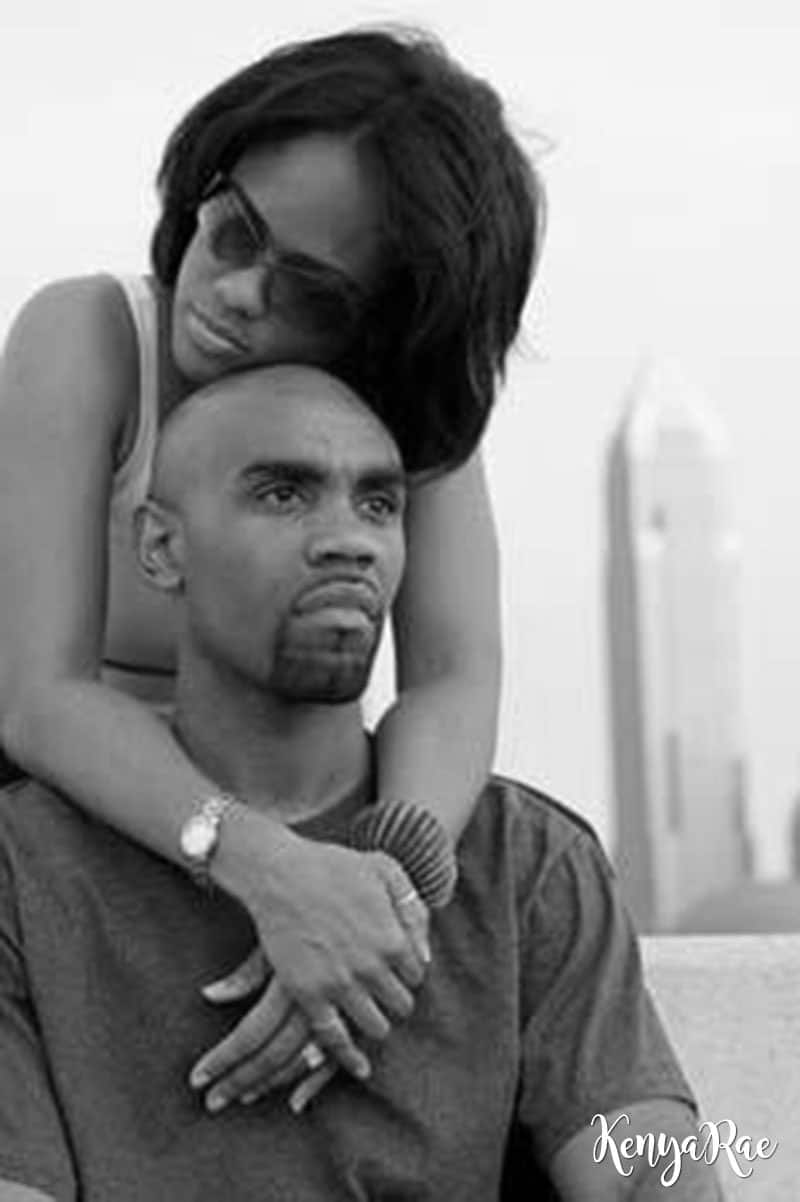 We were best friends, we loved each other and we knew it, but we didn’t think we were right for each other.  Both allowing the other to just be who they were and being there. Until we collided due to life's circumstances, and wouldn't you know it fit.  We fit – together. 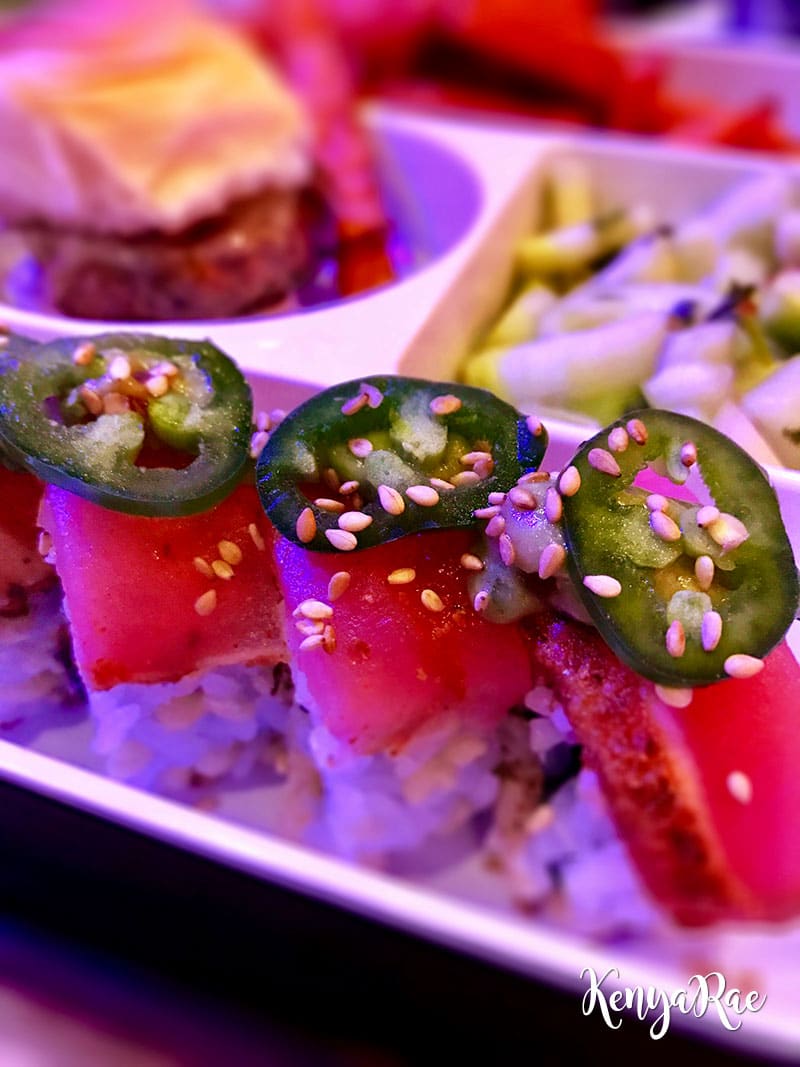 It’s the marriage between gourmet burgers and sushi, two of my favorites.

Like me and the old dude, they existed independently of each other just fine.  Both with their respective greatness and amazingness.  Until the creators of The Cowfish Sushi and Burger Bar married them in a ceremonial pairing of all that is great in the world.

It all happens in each of their kitchens, located here in Raleigh, and other locations including Charlotte, Atlanta, Orlando and real soon in Birmingham, Alabama!

Life after marriage has been an adventure to say the least, yall know.  I’ve told yall…. Between trying to live up to our full potential, learn as much as we can, so we can teach our children, and raise them up to be responsible amazing humans that contribute their own respective greatness to the world. And then being in a city more than 500 miles away from everyone that we know and love.

See Also: The Real Truth About My Blended Family

With all that happening date nights are far and few between, outside of our weekly grocery date.  But when they happen, the real deal date nights…. we like to get out and get good food in a good atmosphere.  And that is why I just have to tell you about Cowfish!

Cowfish is a restaurant born from the desire to combine the best of two worlds.  Creating an environment that anyone can come and enjoy!  Whether it is a date night, a family night out or just a casual outing with your closest friends.

It’s a love story of sorts.

The union between me and my old man, might not be as exciting as theirs so I won’t say too much about it.  Except that it happened on a beautiful summer day, at a lodge in Ohio, not far from our then home. And it was AH-MAZ-ING! 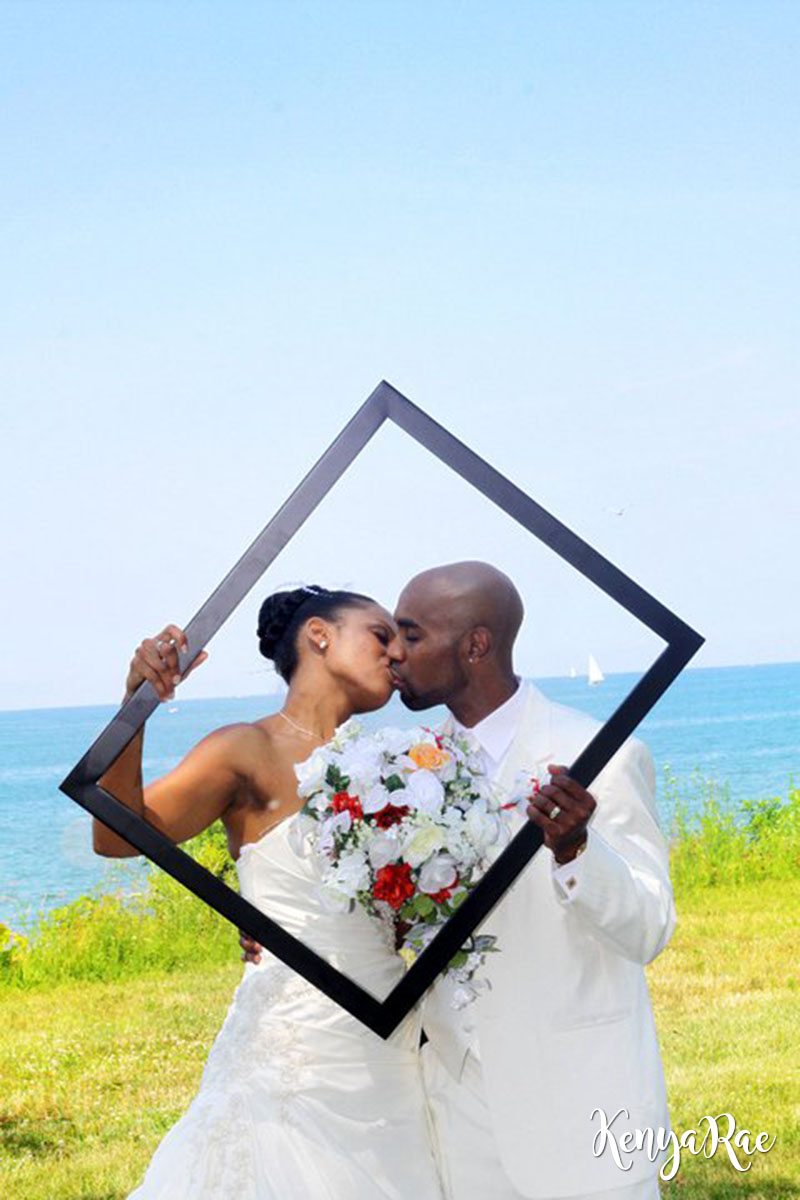 We have commonalities that help us understand each other, and our differences make us love each other. Together we are just better. No doubt! 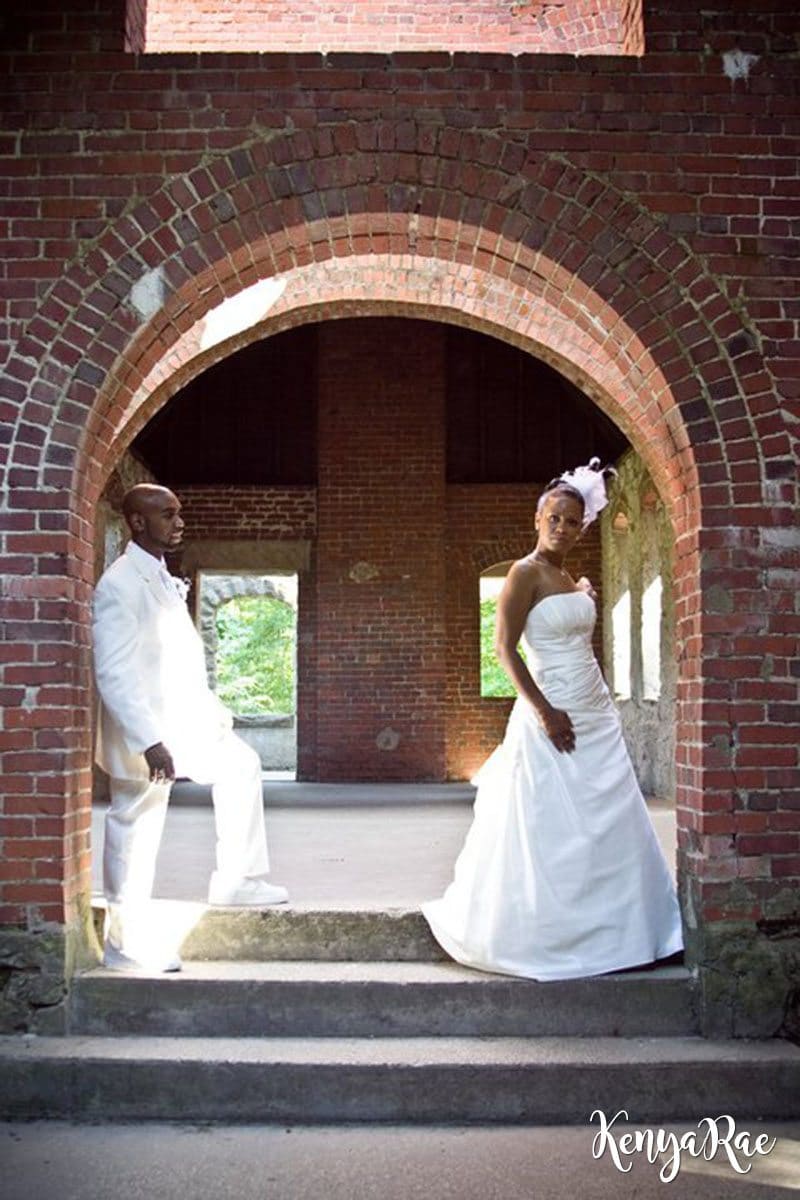 Burgushi is the food version of us y'all…

Last week, we had the pleasure of getting out and seeing what Cowfish has to offer for ourselves.  I had heard about them in a write up from an Atlanta blogger before moving to Raleigh.  So when we moved here, and I realized they were here, I had my heart set and my stomach ready on getting there!

We started out with a burgushi roll.  This particular one had bison in it.  A first for the both of us.  The Nature Boy's WOOOOO-shi BuffalOOOOO-shi Roll.  Named after wrestler Rick Flair.  Apparently he is a regular at the Charlotte location, coming in regularly and making his own roll.  And everyone can do that, just so you know.  But after him ordering it multiple times Cowfish got the go ahead to not only add it to the menu but to use his famous call in the naming. 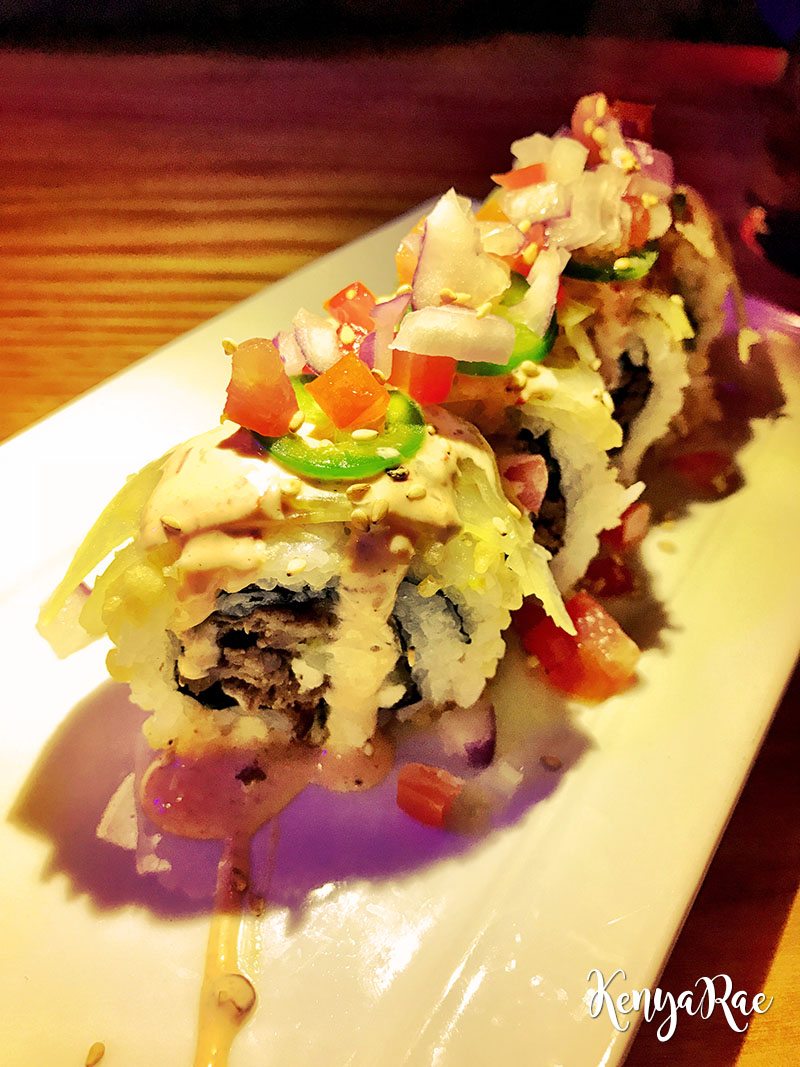 I didn’t know this but the hubs “learned me up” and told me how when Rick Flare would “bust a move” he would yell out Woooooooo in a high pitched manly way.

Anyhoo, that roll was nothing short of amazing! And I could have stopped right there as it was a complete dance party in my mouth. 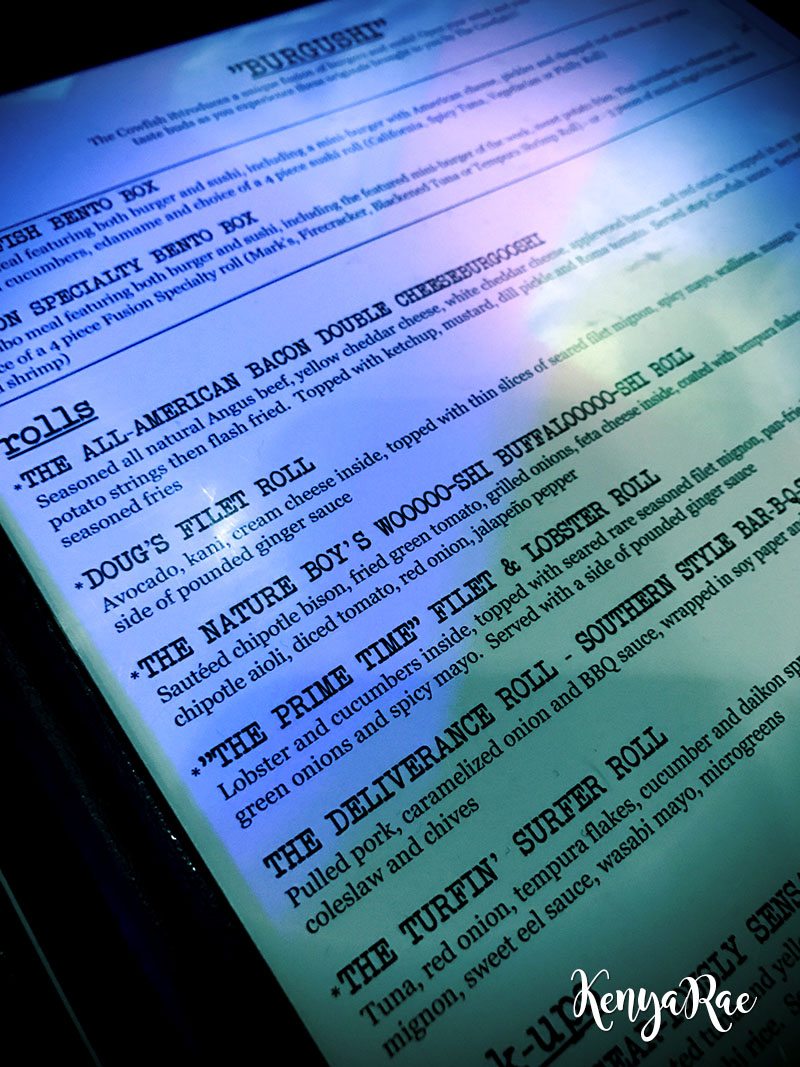 But then hubs and I both ordered the Fusion specialty Bento Box!

Whew Chile!  My taste buds wanted to jump out and smack me.

The Bento box was made up of the mini version of the burger of the week.  Which I subbed out for a turkey burger.  It was delicious and simple.  A burger with an avocado salsa, which is a fancy name for guacamole.  The hubs indulged in the firecracker burgushi roll while I decided on the blackened tuna one. OH EM GEE yall.  I just wanted to dance.  Good food makes me want to bust a move.  And I can’t dance… 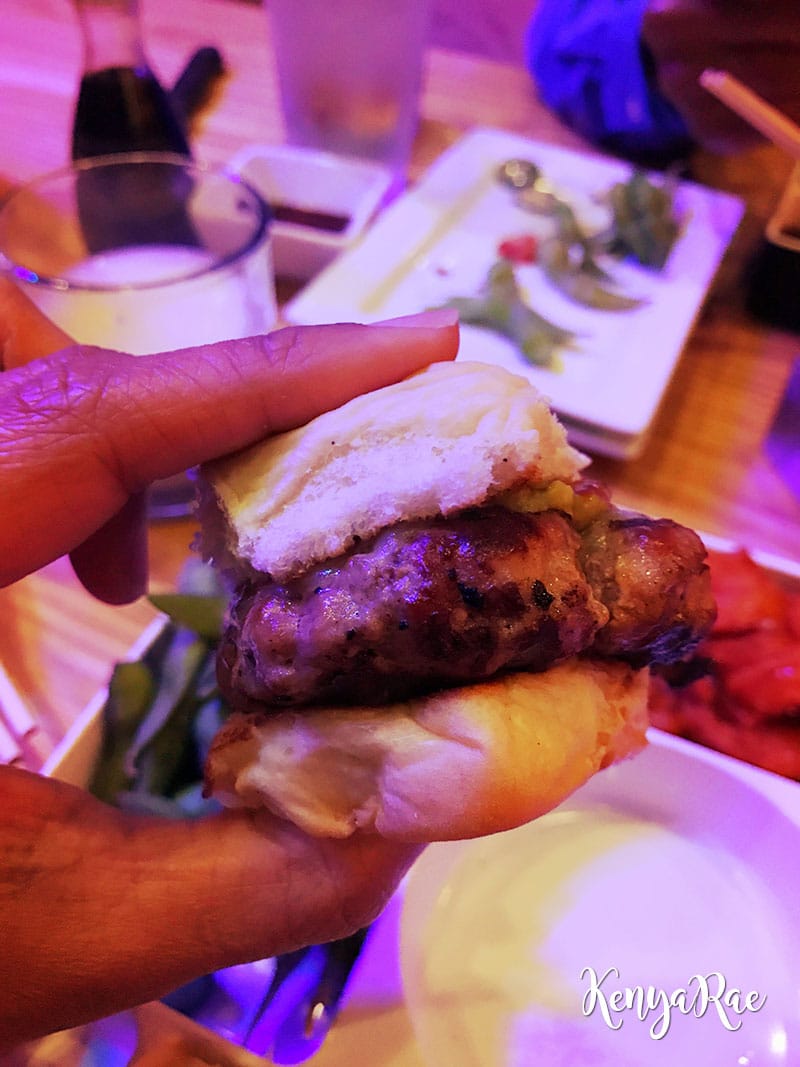 The box also came with sweet potato fries, edamame, and this sweet and spicy cucumber salad… ALL OVERWHELMINGLY DELICIOUS! 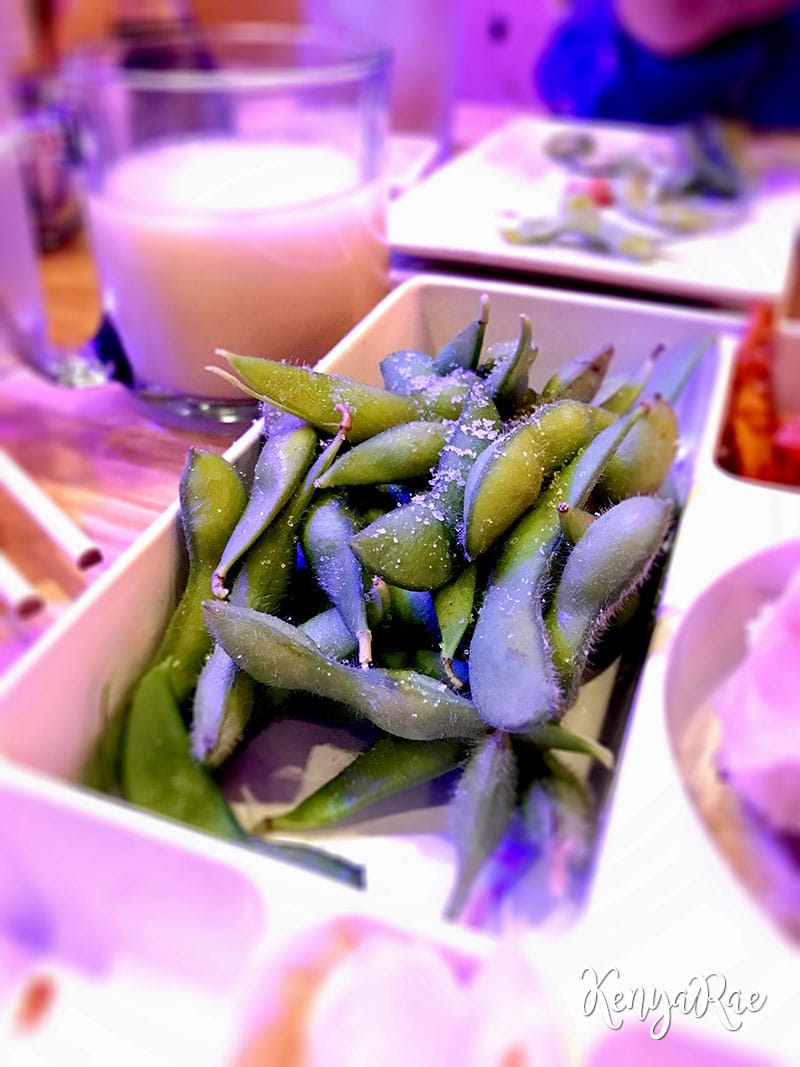 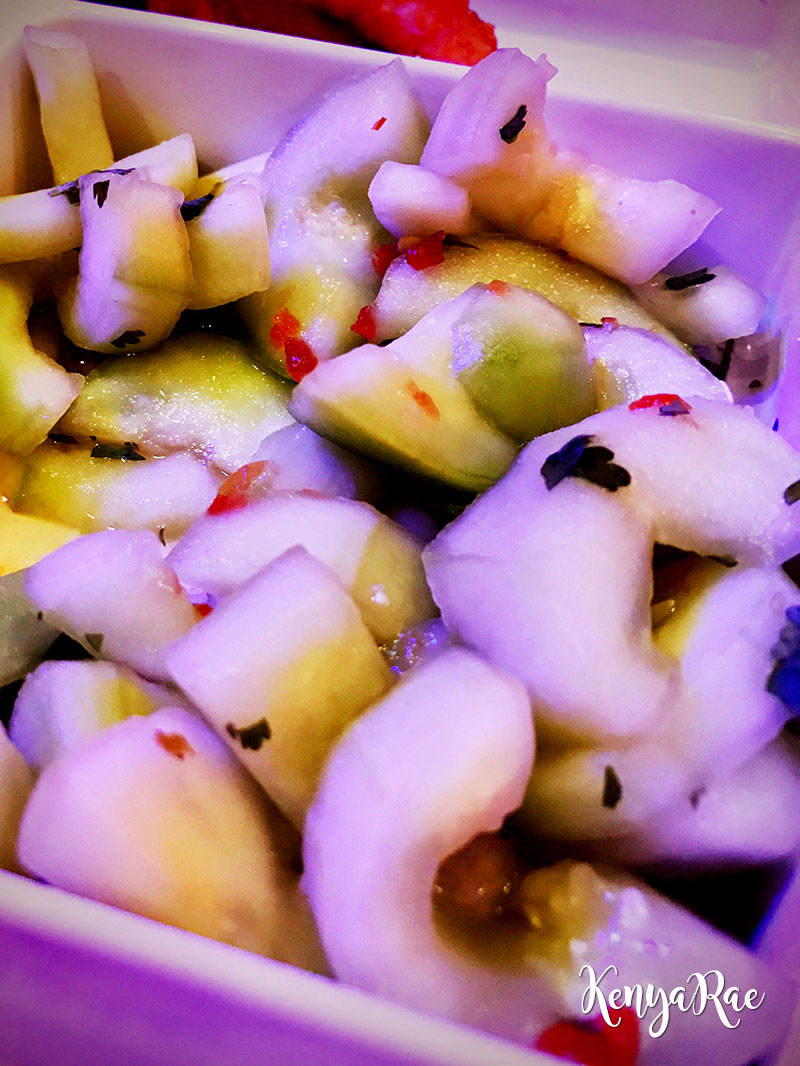 There was so much food that we packed it up and had leftovers for lunch the next day.  And guess what? It still tasted good! 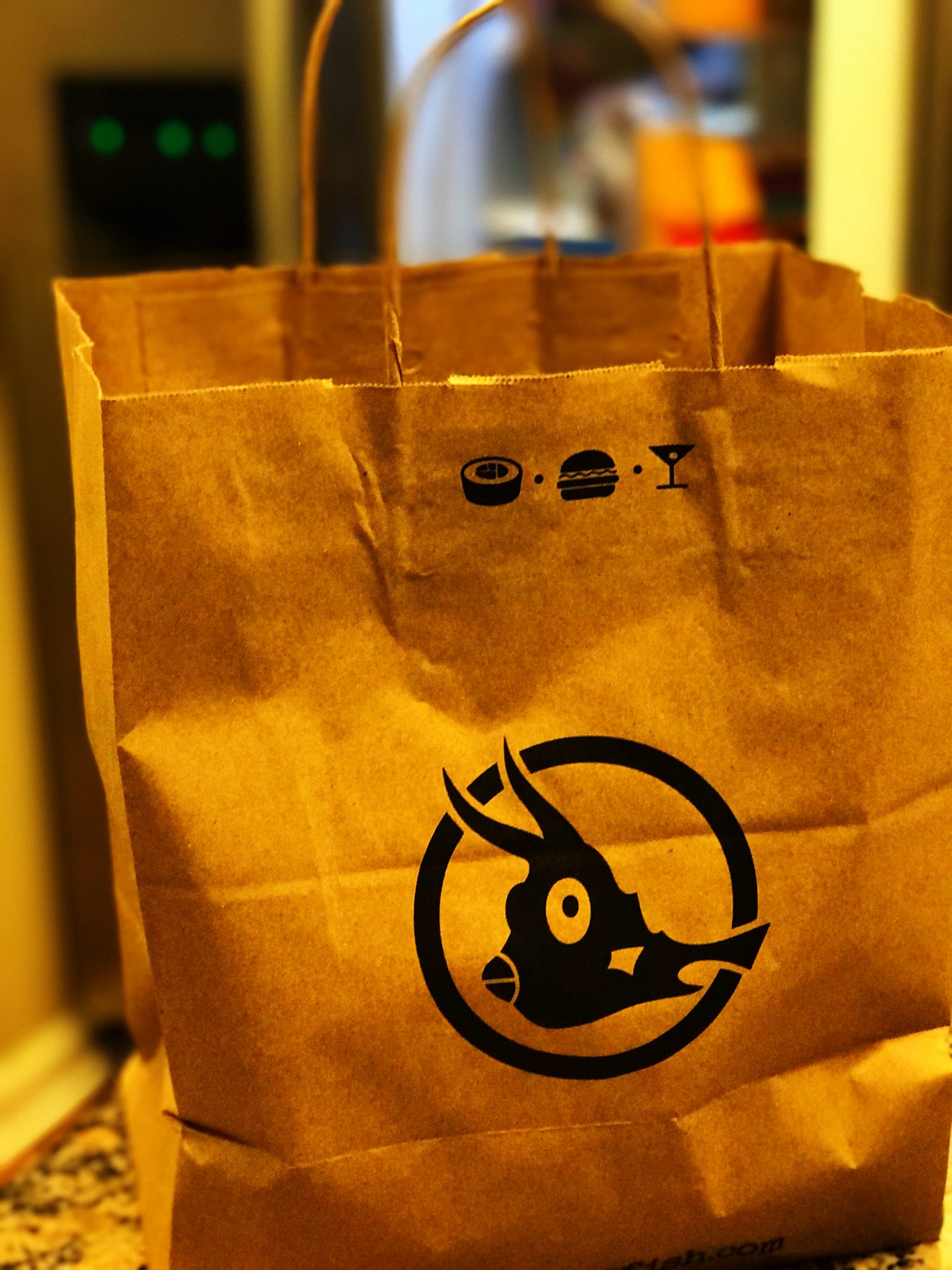 We finished off the night with a slice of Chef Dave's Not Factory Made Cheesecake. Thats the for real name… 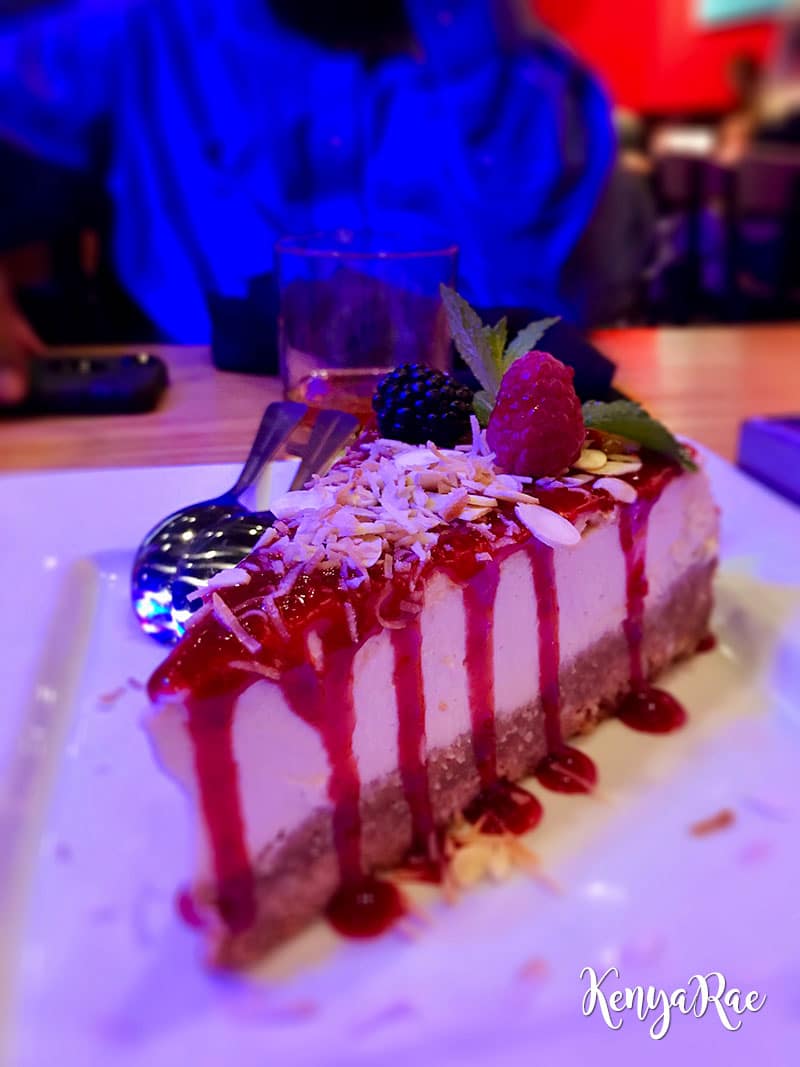 Go ahead and drool…

We couldn’t finish that either, cause it was a nice size.  I brought it home to my daughter.  She loves cheesecake and since she kept her brothers while we got out, she deserved a small part of the goodness too I guess. LOL.

When she saw it, she tucked it under her shirt and went and hid from her brothers so she didn’t have to share.

SMH. She might get that from me, but I ain’t gone admit it. LOL

My taste buds were beat after all that y’all.  They were constantly pleasantly surprised with each bite.

And with that we have added another favorite in our love story.  We have our love for hitting the lake on a nice summer night back home.  Sitting and listening to live music for hours on end whenever and wherever we can.  Eating at our list of favorite go-to spots, and now Cowfish is on that list.  It is one of those places we will take friends and family when they come to visit. 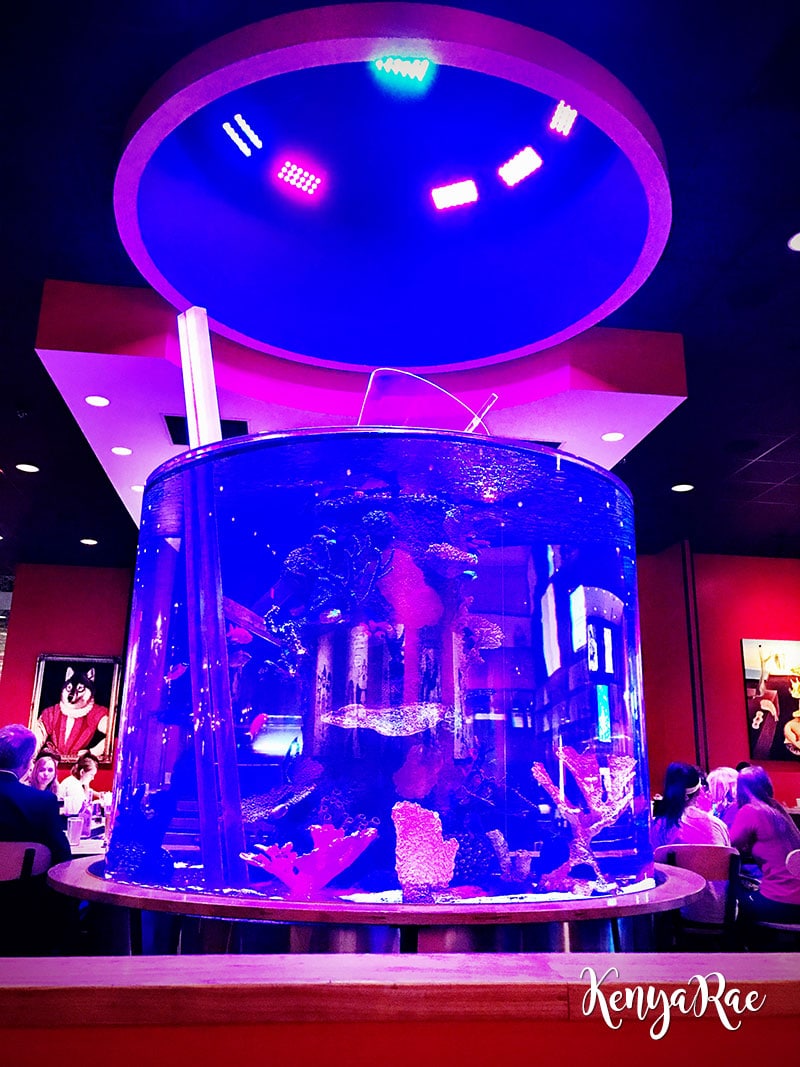 If you are in the Birmingham area, the new location of The Cowfish anticipates hiring 125 team members and will occupy an existing 6,000-square-foot space that includes a covered patio area at The Summit near Saks Fifth Avenue, 105 Summit Blvd, Birmingham AL 35243.  Set to open in summer of 2017. 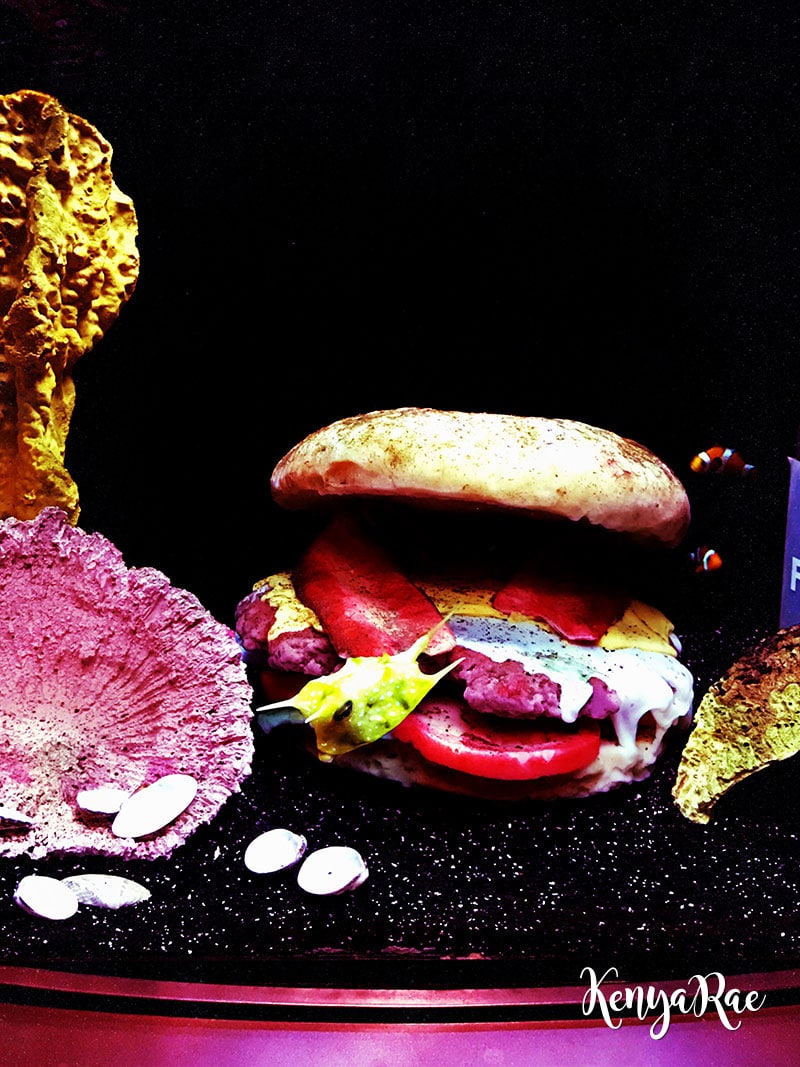 and this guy was hanging out near the restrooms

Other locations include, Charlotte, N.C., the flagship location, and others in Raleigh, N.C., Atlanta, Ga. and Universal Orlando Resort.

What say you?  Will you check it out? Have you already?  Tell me in the comments…
restaurants
Questions, Comments or Just Want to Say Hey ????????, Drop Me a Line in the Comments.
FacebookTwitterPinterestEmail

6 Ways You Know You Are An Introverted Mom

You both look lovely! Beautiful photos!

Love the juxtaposition of food and marriage, the unlikely yet successful coming together of vastly different food items and people. Love this and the pics of the food are fab!!!